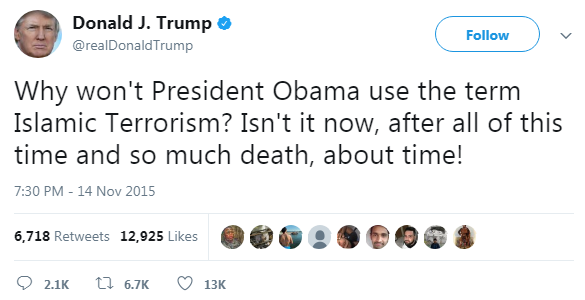 This infamous tweet was lobbed by Dear Leader at President Obama for insisting on calling terrorist acts “terrorism”, rather than specifying that some terrorist acts are perpetrated by those claiming to be Muslims.

It is now ironic (and tragic and infuriating) that in the wake of the Charlottesville white supremacist march, we cannot as a country agree on how to talk about this.

I have an idea:

The murder of Heather Heyer by a white supremacist (who shall remain nameless) was an act of hatred, bigotry, and terror by a proponent of a hate-filled and fear-mongering ideology.

That is the definition of terrorism.

So, if we insist on identifying “Islamic Terrorism” as such, then I insist we also identify White Terrorism as such, lest we be labeled hypocrites.

PS – I do not claim to have spawned this idea. Many others have already done so on much bigger stages. This just sums up my feelings after Saturday’s events.