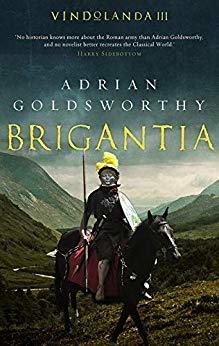 Brigantia is the third novel in the Vindolana saga, Adrian Goldsworthy’s epic historical fiction set in Roman Britannia during the early years of Trajan’s reign.

The third installment of the Vindolanda saga is as compelling and full of twists as the first two. New characters are introduced who bring renewed depth to the story, but the mainstays all have their part to play.

The plot also uncovers even richer and more intricate details about Ferox’s past and his dueling identity as both Roman Centurion and Silures Prince.

Staple characters like Ferox, Vindex, and Crispinus make their return as the Romans stationed in Britannia deal with growing resentment among the tribes and swelling rumors of rebellion. The story takes us to even more far-flung locales on the island, from Londinium in the south to Segontium in Wales.

Goldsworthy expertly folds new characters into the plot without making it clear who the key players are until well into the story. This really keeps the reader guessing as to where the plot is headed through the middle of the book.

The narrative climbs to a clash of rebels against Romans, with still some intrigue to sort through in terms of who’s on whose side. Then, the story ends on a coda — it’s not an ending of all endings, but it is a resolution.

Perhaps the greatest achievement of this novel and this series is that it could well stand as a trilogy and feel like it has come to some form of resolution. Simultaneously, it could absolutely continue as an epic saga.

I will fully admit that going into this series, I assumed it was just a trilogy. However, Brigantia ends in such a way that the series could continue. I now cannot explain how much I want this series to continue.

The characters are too interesting, the setting too rich, and the time period too fascinating for me to just stop now!

See my previous reviews on the novels of the Vindolanda saga: