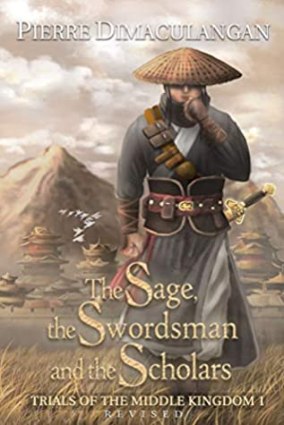 I’ve been looking forward to reading this book since then, and I wish it hadn’t taken me so long to get to. Still, it was well worth it.

The Sage, the Swordsman, and the Scholars  is a historical fantasy focusing on Sun Xin, a warrior in Middle Kingdom China who has seemingly lost his way in life. Through his won encounters and his association the Scholars — an order of warrior-academicians — Sun Xin learns of a dark and terrible threat to his people

Part personal journey for Sun Xin and several other characters and part epic war novel, this story feels like a doorway opening into an entirely new world. As a self-described Sinophile and history buff, the author has created a universe steeped in history and culture where his love of history blends seamlessly with more fantastical elements, including a fantastical race known as the Terukk and the dark magic they wield

The story starts off slowly, focusing mostly on Sun Xin’s journey, while also introducing a lot of the main players, especially the Scholars. However, once the larger conflict with the Terukk is revealed, the myriad characters come together to fight this terrible enemy.

I really enjoyed the richness with which Dimaculangan created this world and its people. His eagerness to teach readers about Middle Kingdom culture and belief systems leaps off the page and ropes the reader into his enthusiasm. The voice and tone is reverent without being overly serious, and there is levity in some of the interactions between several of the characters. The author uses exposition fairly heavily, primarily to fill gaps in the reader’s knowledge between scenes. This could drag down the pace at times, but it also filled the story with a depth that would be difficult to achieve without expository sections.

This book would benefit from further editing/revision, and I became frustrated at times with the tense switching and over-long paragraphs. Readers with a more critical eye may find this off-putting, but it did not prevent me from finishing and enjoying this story.

It also will not prevent me from picking up the second book in this series, whenever it’s available.