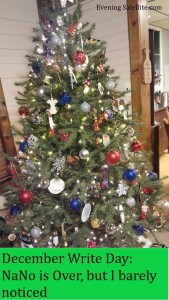 I’m sensing a pattern here, in that each month seems to pass more quickly than the last.

This post is a week late because I wanted to finish “The Grand Mythos”, so we’re already almost halfway through December. Oh well.

November was solid. Thanksgiving is my favorite holiday, and we had a nice time with family, but I’ve also taken some interesting steps on the writing front.

Not only did I finish publishing my mythic fantasy series, but I’ve also started writing my short story. END_OF_DOCUMENT_TOKEN_TO_BE_REPLACED

A lot of blogs and publishing websites will tell you to research your genre and see what concepts or ideas are currently trending in the market. If you can quickly develop a similar concept, write the story, and publish, you could ride the coattails of similar books and sub-genres to a better launch.

That’s a solid strategy for selling books, but I personally do not feel like it’s a great strategy for writing meaningful stories. If you’re writing a concept that is meaningful to you, and it also happens to be trending in the market, that’s great! You’re probably on your way to some good sales numbers.

But I would argue that telling the most meaningful story should come first; sales and marketing come second.

Tell the Story You Want to Tell

Beyond the sales side of it, it can be easy to get wrapped up in your own expectations for your ideal story. You have a great concept in your head, with your main characters and a good sense of where the plot will lead all lined up.

But you can’t start writing… you actually avoid trying to craft that first line. Why? Because the concept is so perfect in your head. Before it touches paper or a computer screen, it doesn’t require revisions or editing. No one can criticize it. You don’t have to worry about disappointing sales numbers or lack of readership. In your head, that story is exactly what you think it could be.

I realized I was doing this recently with a new concept for a two- or three-part short story. I’ve had a lot of ideas to diversify my writing projects and to get smaller things published while I work on WoEL, which will certainly not be ready to publish for at least another year.

One such concept is a multi-part short story that I can publish in parts on KDP, then as a single volume in print. I’ve outlined quite a bit, particularly for my protagonist, and I feel like the concept is solid enough to start writing.

But I have yet to actually start writing. Instead, I was getting ready to start another project, one with much lower stakes. This one would be a running travelogue-style series on Wattpad — just short entries every couple of weeks following one particular character.

I like both of these ideas, and I want to pursue each of them, but I haven’t had any movement on the short story.

Now, what are the key differences between these two ideas?

This short story is the one I really want to write, but it comes with a much greater commitment of my time and energy, and it will be exposed to a wider audience (I hope).

I’ve neglected actually writing it because of the risk it involves. I can’t get it done in time, or people won’t like it, or it won’t sell. I’ve let the fear of those things keep me from writing, but I can’t control any of those things until I actually write the story.

So, it’s easy to get caught up in all the what-ifs involved with writing and publishing a story, but if that idea sticks with you, lingering in the back of your mind for months on end? Leave the fears behind. That’s the story you should be working on. Worry about the rest later.

Halfway through November, National Novel Writing Month is going pretty well for me. I think I’ve started to figure out a real writing process in the limited writing time I actually have day to day.

And it’s only taken me five months to get here! END_OF_DOCUMENT_TOKEN_TO_BE_REPLACED

The high school creative writing class I visited a couple weeks ago wrote a thank you card for me!

END_OF_DOCUMENT_TOKEN_TO_BE_REPLACED

Much like September, October flew by. However, I am feeling much better mentally than I did the previous month.

I can’t claim to have had a productive month, but I enjoyed and was invigorated by a lot of what I did. END_OF_DOCUMENT_TOKEN_TO_BE_REPLACED

Wow, I had such high hopes for September, and it basically slipped through my fingers. We traveled each weekend but one, including our week-long beach vacation.

Rather than allowing me to refocus mentally and creatively, that time off flew by and dropped me right back into life like a rock. I didn’t take even one beach photo, and I always take pictures of the beach.

So September unwittingly became a break from writing. END_OF_DOCUMENT_TOKEN_TO_BE_REPLACED

August was yet another slow month on the writing front, but I feel like a lot happened this month. I was in Chicago for two days, which seems like several months ago, and we traveled basically every other weekend we had.

Still, I came to some interesting / pertinent decisions regarding my authorly life. END_OF_DOCUMENT_TOKEN_TO_BE_REPLACED

I’m currently knee-deep in the second-act slog of my first draft of The Warden of Everfeld: Legacy.

The most important characters have been established. A couple of key side-characters and plots have been introduced, or at least teased. I have solid ideas for the ending.

I’m just having trouble getting there. END_OF_DOCUMENT_TOKEN_TO_BE_REPLACED

It would be nice if my brain would just balance out for a bit. Like… a week? No? We’re going to swing wildly across the creative spectrum in a matter of days?

Through a (completely unintentional) process of reading a fairly wide range of short fantasy stories, reorganizing some of the sections in my draft, and outlining the next few chapters, I managed to collect enough creative juice to write a ton over the weekend for The Warden of Everfeld: Legacy.

And now I have too many ideas and I want to write ALL OF THEM! END_OF_DOCUMENT_TOKEN_TO_BE_REPLACED

Check out fantasy adventure novel, The Warden of Everfeld: Memento, the debut novel from Steven D’Adamo.