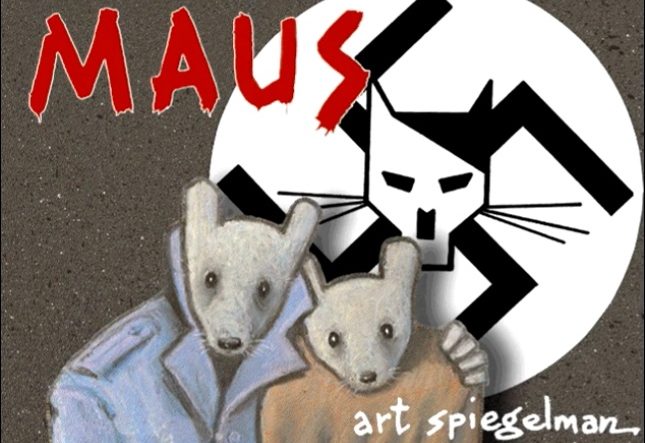 Recently, I read Art Spiegelman’s Pulitzer Prize winning graphic novel Maus. Written about his father, Vladek’s, experiences during the Holocaust. It’s been on my to read list for awhile and given the resurgence of f**king Nazis in America right now, this seemed a punctual read.

The magic lies in the juxtaposition – The terrible, miserable truth of the Holocaust as represented by vaguely adorable animal caricatures. The trivial routine of the told present with its bank visits and grocery shop returns intertwined with the shattering, shocking recounting of horrors nearly unbelievable, and hopefully never to occur again. The son’s casual acceptance of paying for goods and services compared to his father’s near refusal to spend money on anything, even necessities. The marked difference between Art’s fluent, native spoken English and Vladek’s disjointed vernacular. The beautiful optimism of struggling through vicious and soul destroying events because of faith in the future, rivaling the urge to give up and be pessimistic, to fall prey to the seemingly inevitable death that awaits, that is the easier choice.

While reading, I had these stray thoughts:

‘…I’m only on page 14, and already the attention to detail is a little startling; Artie’s dad is on a stationary bike and two things just stand out: 1) his number tattoo, a branding remaining of his time in a concentration camp, and 2) his dialect. Artie’s dad perfectly illustrates how one might speak their second language. I’m anticipating a very nuanced story to come….’
‘…Vladek, Art’s father, goes on a tangent on page 47. Seemingly inconsequential, this pulls me in deeper, helping allay any suspension of belief because even though I’m looking at mice instead of Jewish people, pigs instead the Polish, and cats instead of the Germans. The dialogue, especially the contrast between Art’s easy flowing native speaker English and his father’s slightly disjointed English is digging me deeper. Fantastic…’
‘…Further convincing evidence? Vladek tossing his son’s worn out trench coat, complaints about money, and the assumption, that his son, would still do chores (fix a drain pipe) at thirty. I don’t think I’ve ever encountered a comic book that dealt so realistically with every day life.’

Thought provoking and heart wrenching in equal measure. You know, I don’t think I ever could have guessed I’d feel sad about the plight of mice. Spiegelman’s work is iconic and accessible, and in these times, so very needed.