Having a son has taught me a lot. I’ve learned how to put a diaper on a baby tight enough that they don’t pee around it. I’ve learned the various phases of infant defecation. And I’ve learned that making my son smile for the first time—and I mean really smile, not a muscle reflex—is one of the most fulfilling moments of my life.

But I’ve also learned that being a dad is really just an endeavor in ego-feeding. Very caring, loving, and dare I say selfless ego-feeding.

I was pretty intimidated by the idea of having a child. I still am most of the time.

Some of that came from the idea of knowing how to be a good father. A small part of me doubted that I could, because I’ve always struggled to find strong, positive male role models in my life.

I’m not going to psycho-analyze myself here, but let me just say this: my dad is a good, caring man who loves his children more than anything else in the universe. But he was not the Father Figure I might have wanted or needed. Part of that is my fault, because I didn’t let him be that authority figure and role model in my life after a young age. But it still feels like I’ve cobbled together a concept of being an adult man from numerous sources. 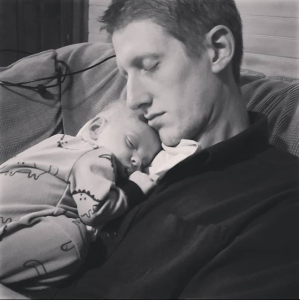 So, I was a bit anxious about the everyday Dad Life before my son was born. I didn’t really know what to expect or how I would deal with the sudden weight of responsibilities and expectations and dirty diapers.

As it turns out, being a good father is… not easy, but… natural? That doesn’t feel like the right word either, but I’ll move on.

The expectations and responsibilities, and yes, even the dirty diapers, are external pressures that can be ignored with little to no effort. (Wait, wait. I’m not ignoring the dirty diapers. I still clean him and throw the diapers away. They’re just not a source of stress.) Why worry about that bullshit when I’m cradling that little dude?

What a touching sentiment, right?

Surprise! It turns out this is a totally selfish desire!

Okay, not totally, because me being a good father is ostensibly good for him, too. But my desire for him to see me—to remember me—as a good father?

That’s legacy. A legacy I will defend until my last breath, but legacy all the same.

And yes, again, that legacy comes with the benefit of, you know, being a good father, and teaching my son all kinds of cool shit. Like how to chop wood and distinguish Speyside from Highland scotch by nose alone.

Alright, maybe when he’s a few years older. But teaching him how to express himself, be confident in who he is, love his friends and family openly and completely, and strive for whatever he believes in…

Those are the kinds of things I want him to think about and know that I, in some small way, helped him figure them out.

So yes, of course I am doing all of this out of pure love and joy for his very existence.

But there’s also my legacy to consider.

2 thoughts on “On being a Dad, and Also being Selfish”