Last month, I wrote a brief summary of how to create and manage a pay-per-click (PPC) campaign through Taboola.

Now that my campaign has ended, I’d like to go through and analyze how it all performed.

I ran my PPC campaign for two weeks from July 11-24. This was honestly a bit short for my liking, but my limited budget could only be stretched so far.

Taboola provides intuitive summaries of your campaign(s) throughout. The above image shows the performance of all three of my campaigns combined. The yellow line is clicks, and the blue is money spent.

As you can see, both the clicks and spend were highest at the very start of the campaign. This is typical, since new campaigns should generally begin with higher cost per click rates (CPC). However, I was able to steadily decrease my daily spend while maintaining my clicks (with some fluctuations).

Now, let’s get into the performance of each campaign.

Three Campaigns for One URL

As I explained in the previous post, I ran three campaigns with four headlines each based off of one URL (my blog announcement for my book’s pre-order period).

The campaigns were split between device type: Desktop, Tablet, and Mobile. Within the first few days, the mobile campaign looked like it would be the most cost- and click-effective.

That proved to be the case. I spent the most on my smartphone campaign, but it was far more effective — just note the average CPC per campaign:

As the campaigns progressed, I diverted more and more of my budget from Desktop to the other two, and eventually, shut down the Desktop campaign altogether several days before Smartphone and Tablet expired.

The smartphone campaign also gave me nearly two-thirds of my total impressions — the number of times one of my headlines was viewed on a user’s screen. Even if they didn’t click the headline, 1.8 million people saw my cover illustration on their phones and may recognize it if they see it again in the future.

As should be expected from the above, my headlines performed better overall on the Tablet and Smartphone campaigns. My top five headlines for clicks came from one of these two campaigns.

I used four headlines in each campaign to test their effectiveness on each platform:

Each headline performed slightly differently between the platforms, but in general: 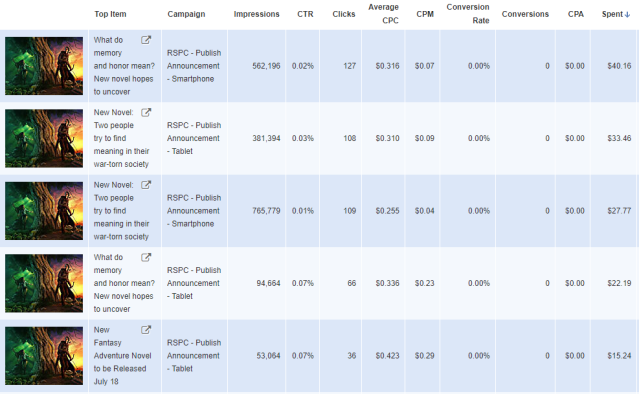 My Desktop platform cost me more money for fewer clicks, with a CPC of $0.42. With the Smartphone campaign in particular, I managed to nudge my CPC down to less than $0.30.

I can reuse my top 2 headlines

“What do memory and honor mean…” and “New Novel: Two people try to find meaning…” can definitely be used in future campaigns. These two headlines combined for 471 of my 612 clicks.

I can drop my worst headlines

“Explore the Unique World of Everfeld…” received a grand total of 76 clicks. With CTR under 0.04%, this headline was clearly not popular.

“New Fantasy Adventure Novel to be Released July 18” performed alright, but it isn’t really relevant to future campaigns, since my novel is now published.

Headlines unique to my story are more engaging

Take a look at my four headlines again. The top two performers both hint at the larger themes present in my story. I think it’s safe to say that these less generic and less vague headlines can provide a template for future headlines.

Simply saying that a fantasy novel is being released is uninteresting. Enticing users to click on my headlines is exactly the point, so I can try to follow those themes in the future.